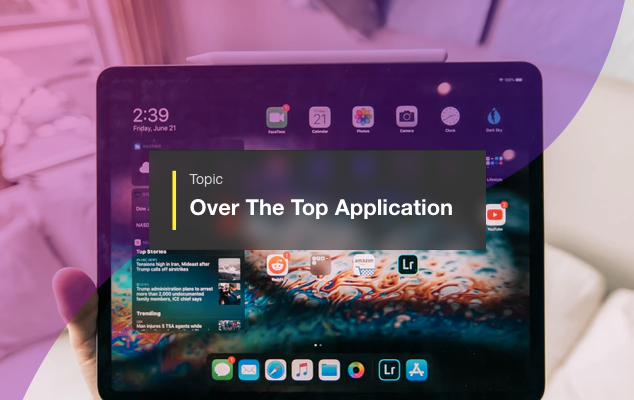 An over-the-top (OTT) application is any app or service that provides a product over the Internet and bypasses traditional distribution. Services that come over the top are most typically related to media and communication and are generally, if not always, lower in cost than the traditional method of delivery.

You can think of an over-the-top application as anything that disrupts traditional billing models – from telcos or cable/satellite companies. Examples include Hulu or Netflix for video (replacing your regular TV provider) or Skype (replacing your long distance provider).

The creation of OTT applications has led to a wide-ranging conflict between companies that offer similar or overlapping services. The traditional ISPs and telcos have had to anticipate challenges related to third-party firms that offer over-the-top applications. Think, for example, of the conflict between a company like Netflix and a cable company. Consumers still pay the cable company for access to the Internet, but they might get rid of their cable package in favor of the cheaper streaming video over the Internet. While the cable company wants to offer fast downloads, there is an inherent conflict of interest in not supporting a competitor, like Netflix, that bypasses cable’s traditional distribution channel.

Basically, any service you are receiving over the Internet that is NOT provided directly by your Internet Service Provider (ISP).

Of course, for an ISP / telecommunication provider, the critical point about an OTT app/service is the part I emphasized – it is NOT a service you are paying them for.

It’s not clear to me when precisely we in the industry started talking about “over-the-top” applications and services, but I first saw OTT mentioned back in 2008 or 2009 when the term was primarily applied to video services such as those coming from Netflix or Hulu. At the time, major US service providers such as Comcast and AT&T were rolling out their video-on-demand services and were being challenged by these “OTT” providers. Netflix and Hulu provided their service “over-the-top” of your Internet connection, without any interaction whatsoever with your Internet service provider (nor any revenue to that service provider).

Since that time, I’ve seen “OTT” applied to the zillions of messaging apps that have now sprouted up in the mobile environment to provide an alternative to the costly SMS provided by the traditional telcos. WhatsApp, Apple’s iMessage, Blackberry Messenger (BBM), TU Me… and a hundred others that keep popping up on a weekly basis. Some would even lump Twitter and Facebook into this category. (And SMS revenue by telcos are facing a serious decline from the use of these apps. Ovum estimated the decline at $13.9 billon for 2011.)

I’ve also seen “OTT” applied to VoIP apps such as Skype (whose network overlay architecture I wrote about previously). And now we have Apple’s Facetime and a hundred startups like Viber, Voxer, Tango, etc.

Recently I saw a document that painted “OTT” even more broadly as a term applying to any “content provider” on the Internet, i.e. basically everyone publishing content in any form.

The key point of all of this is that the OTT apps/services do not come from the traditional telcos or Internet service providers.

The telcos and ISPs are merely providers of the IP connectivity. The OTT apps ride on top of that Internet connection.

The telcos and ISPs are simply big, fat, dumb pipes.

Some of the telcos and ISPs out there are smart enough to see what’s going on and are trying to become the biggest, fattest pipe out there and provide the best possible service. Some are launching their own apps/service that are NOT limited to their own customer base.

And some of the telcos are so desperate to hold on to their legacy business models that they are trying to get the International Telecommunication Union (ITU) to regulate OTT apps and service providers through the upcoming World Conference on International Telecommunications (WCIT). They are hoping to use WCIT as a vehicle to re-inject themselves into the revenue stream and somehow start charging “OTT” providers. (But that’s a topic for another blog post…)

OTT apps and services are a major component of the ongoing war between “content providers” and “access providers”… a fundamental tension within the Internet that shows no sign of being resolved anytime soon. But more on that another time… 🙂

In the meantime, what we all can do is reject the use of the term “OTT” from the telcos and instead focus on referring to these apps instead as:

because they are just apps that work on IP networks… whether those are from the legacy telcos or any other service provider.

The above is a brief about Over the Top Application. Watch this space for more updates on the latest trends in Technology.