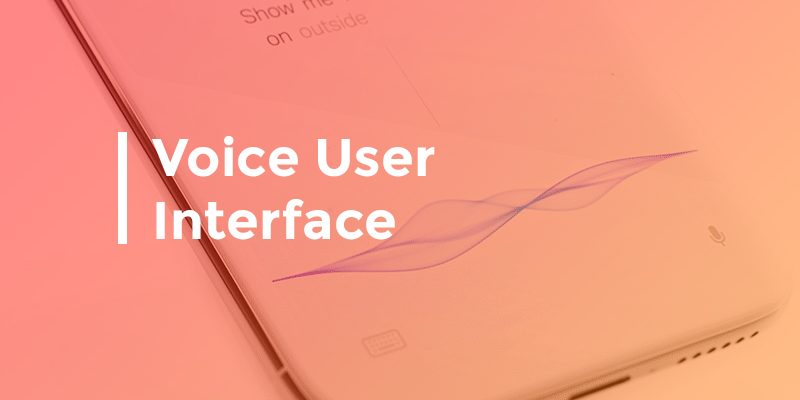 A Voice-user interface (VUI) makes spoken human interaction with computers possible, using speech recognition to understand spoken commands and questions, and typically text to speech to play a reply. A voice command device (VCD) is a device controlled with a voice user interface.

Voice user interfaces have been added to automobiles, home automation systems, computer operating systems, home appliances like washing machines and microwave ovens, and television remote controls. They are the primary way of interacting with virtual assistants on smartphones and smart speakers. Older automated attendants (which route phone calls to the correct extension) and interactive voice response systems (which conduct more complicated transactions over the phone) can respond to the pressing of keypad buttons via DTMF tones, but those with a full voice user interface allow callers to speak requests and responses without having to press any buttons.

Newer VCDs are speaker-independent, so they can respond to multiple voices, regardless of accent or dialectal influences. They are also capable of responding to several commands at once, separating vocal messages, and providing appropriate feedback, accurately imitating a natural conversation.

A VUI is the interface to any speech application. Controlling a machine by simply talking to it was science fiction only a short time ago. Until recently, this area was considered to be artificial intelligence. However, advances in technologies like text-to-speech, speech-to-text, Natural Language Processing, and cloud services, in general, contributed to the mass adoption of these types of interfaces. VUIs have become more commonplace, and people are taking advantage of the value that these hands-free, eyes-free interfaces provided in many situations.

VUIs need to respond to input reliably, or they will be rejected and often ridiculed by their users. Designing a good VUI requires interdisciplinary talents of computer science, linguistics and human factors psychology – all of which are skills that are expensive and hard to come by. Even with advanced development tools, constructing an effective VUI requires an in-depth understanding of both the tasks to be performed, as well as the target audience that will use the final system. The closer the VUI matches the user’s mental model of the task, the easier it will be to use with little or no training, resulting in both higher efficiency and higher user satisfaction.

Two Microsoft operating systems, Windows 7 and Windows Vista, provide speech recognition capabilities. Microsoft integrated voice commands into their operating systems to provide a mechanism for people who want to limit their use of the mouse and keyboard, but still want to maintain or increase their overall productivity.

With Windows Vista voice control, a user may dictate documents and emails in mainstream applications, start and switch between applications, control the operating system, format documents, save documents, edit files, efficiently correct errors, and fill out forms on the Web. The speech recognition software learns automatically every time a user uses it, and speech recognition is available in English (U.S.), English (U.K.), German (Germany), French (France), Spanish (Spain), Japanese, Chinese (Traditional), and Chinese (Simplified). In addition, the software comes with an interactive tutorial, which can be used to train both the user and the speech recognition engine.

In addition to all the features provided in Windows Vista, Windows 7 provides a wizard for setting up the microphone and a tutorial on how to use the feature.

All Mac OS X computers come pre-installed with the speech recognition software. The software is user independent, and it allows for a user to, “navigate menus and enter keyboard shortcuts; speak checkbox names, radio button names, list items, and button names; and open, close, control, and switch among applications.” However, the Apple website recommends a user buy a commercial product called Dictate.

The above is a brief about Voice User Interface. Watch this space for more updates on the latest trends in Technology.