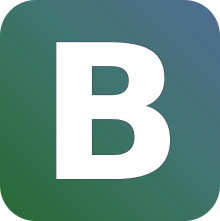 Bootstrap is a free and open-source front-end library for designing websites and web applications. It contains HTML- and CSS-based design templates for typography, forms, buttons, navigation and other interface components, as well as optional JavaScript extensions. Unlike many web frameworks, it concerns itself with front-end development only.

Since Bootstrap 2, the Bootstrap documentation has included a customization wizard which generates a customized version of Bootstrap based on the requested components and various settings. As of Bootstrap 4, Sass is used instead of Less for the style-sheets.

Each Bootstrap component consists of an HTML structure, CSS declarations, and in some cases accompanying JavaScript code.

Grid system and responsive design comes standard with an 1170 pixel wide grid layout. Alternatively, the developer can use a variable-width layout. For both cases, the toolkit has four variations to make use of different resolutions and types of devices: mobile phones, portrait and landscape, tablets and PCs with low and high resolution. Each variation adjusts the width of the columns.

Bootstrap provides a set of style-sheets that provide basic style definitions for all key HTML components. These provide a uniform, modern appearance for formatting text, tables and form elements. In addition to the regular HTML elements, Bootstrap contains other commonly used interface elements. The components are implemented as CSS classes, which must be applied to certain HTML elements in a page.

Bootstrap comes with several JavaScript components in the form of j Query plugins. They provide additional user interface elements such as dialog boxes, tool-tips, and carousels. They also extend the functionality of some existing interface elements, including for example an auto-complete function for input fields. In version 1.3, the following JavaScript plugins are supported: Modal, Drop-down, Scroll-spy, Tab, Tool-tip, Popover, Alert, Button, Collapse, Carousel and Type-ahead.

The above is a compilation about Bootstrap from various sites.  Watch this space for more information on latest trends in Technology.